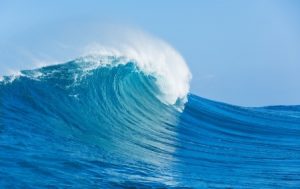 When you hear the term “renewable energy,” the first things that come to mind are probably wind farms and solar panels. Both solar and wind energy generation have undergone something of a renaissance in recent years, but they’re far from the only forms of renewable energy that could be available in the future.

Now that we’ve successfully captured the energy of the wind and sun, some engineers are setting their sights on the ocean as well.

Wave energy is a relatively new form of renewable energy that uses the ocean’s currents to generate power. Because the planet’s oceans are in a constant state of flux, they possess a virtually limitless potential for energy generation.

The trouble, however, lies in figuring out how to effectively tap into that potential. This is due in large part to the fact that different parts of the ocean move in different directions. Whereas local air currents tend to move in one constant direction, the ocean are a little more volatile and hard to predict.

“It goes up and down when you’re out in the water,” said Dr. Belinda Batten of Oregon State University in an interview with NPR. “As you get close to the coast, it’s going back and forth in surge. Within the ocean, the particles go around in circles.”

The engineering challenges that face the fledgling wave energy industry are significant, but certainly not insurmountable. With continued research and development, wave energy could become a viable, cost-effective form of renewable energy before too long.