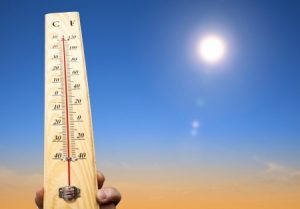 Photovoltaic panels have allowed us to convert the sun’s energy into electricity, but what about those times when you just need heat from the sun, rather than electricity? Let’s say you want to heat your home with solar energy, for example. You could convert it into electricity to power a furnace, or you could simply store that raw thermal energy and release it as needed. This second option is theoretically more straightforward and efficient, but it requires a “thermal battery” capable of capturing and storing large amounts of thermal energy for long periods of time.

Thanks to a team of scientists at the University of Massachusetts, this type of high-capacity thermal battery could soon become a reality.

Last month, the team reported that they had developed a new plastic-like polymer called AzoPMA that could be used to create the thermal batteries of the future. Thanks to a unique molecular structure, this material is capable of storing vast amounts of thermal energy and releasing it on demand. When AzoPMA is exposed to sunlight, its molecules assume a high-energy form that allows the material to trap heat. Once it’s exposed to another external trigger, the molecules revert to a low-energy form that causes them to release their stored heat.

According to a recent article in NBC News, this thermal battery breakthrough “could do for solar tech what high-performance electrical batteries have done for iPhones and Tesla cars.”

In addition to their residential heating applications, high-capacity thermal batteries could be used in a number of other settings as well. They could be used to melt snow on roadways, for example, or to make safe, efficient solar ovens for people in developing nations. In fact, because the technology is so new, engineers are only beginning to explore the practical applications of thermal batteries. Before too long, however, they could become just as common as the lithium-ion batteries that revolutionized portable electronics in the early years of the 21st century.