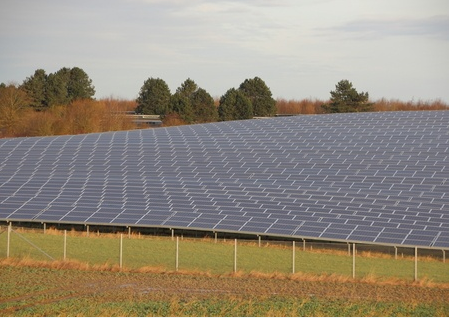 Big news in the energy field here in California: Solar became the No. 1 source of renewable energy in the state in 2015.

That’s according to data compiled by the California Independent System Operator, the primary grid manager in the state. Their numbers show that last year, utility-scale solar power plants produced 15,591,964 megawatt-hours of electricity for CAISO, comprising 6.7 percent of the system’s total of 231,965,326 MWh, according to a recent KQED report.

Even in a drought, longtime stalwart hydropower clocked 5.9 percent, and wind, which had also outpaced solar, represented 5.3 percent.

While 6.7 percent of the total doesn’t sound like much, consider that just four years ago, solar power was responsible for less than 1 percent of CAISO’s totals.

Financial incentives, decreasing component prices and a seemingly never-ending supply of California sunshine can all be attributed to the surge on solar energy. What’s even more fascinating is the notion that the amount of solar power being generated across the state is likely significantly higher than what’s reported. CAISO only includes large plants that sell power wholesale to providers, which means that the reported figures do not take into account the countless residential solar systems in use every day. As panel prices continue to fall, and cities like San Francisco move to require solar panels on new construction, solar energy figures are only poised to continue growing.

Congress recently passed and President Barack Obama signed into law an extension of a 30 percent investment tax credit for solar. It applies to all forms of solar, but will especially aid utility solar, says the KQED article.

Industry analysts are focusing now on what changes a growing solar power industry might bring to consumers. As more users switch to solar power, those left on the grid may end up paying larger shares of the infrastructure costs. Will that trigger restructuring? Time will tell.

In the meantime, as energy conservation and green building consultants, Rick’s Energy Solutions is standing by to assist homeowners, contractors and designers alike in identifying home energy solutions, including preparing and submitting California Title 24 energy conservation and Green Building compliance documents, recommending small changes to improve efficiency and much more to help your home or business be as energy efficient and green as possible. To learn more or to schedule a consultation with Rick’s Energy Solutions, give us a call at 707-578-5380 today.